It's been 17 years since Jamie Oliver put school food firmly on the map, showing us the turkey twizzlers and other junk foods that our children were eating. A lot has changed since then and most school dinners have improved considerably but an even more radical rehaul is needed - especially since the pandemic, according to the charity, Chefs in Schools.

It’s on a mission to elevate food to one of the most important, understood and valued aspects of school life. It works with schools to transform food culture - a huge leap from simply improving what’s served at lunch. Chefs in Schools supports a whole-school food education programme; developing fully trained chefs, teaching food education alongside better quality meals and encouraging the growing of food on site.

The charity currently works with 58 schools, mostly in London, including 10 secondary schools, 5 special schools and 2 nurseries. Plus it supports Enfield Catering services which works with 40 schools in the borough.

School governor Nicole Pisani is one of the charity’s three founders alongside Henry Dimbleby, author of the 2020/21 The National Food Stategy, an independent review commissioned by the government into the food system in England and author of the 2013 School Food Plan. Plus Louise Nichols, who’s an executive headteacher at 3 primary schools in Hackney: Gayhurst, Kingsmead and Mandeville.

We caught up with Nicole to hear why our schools and trusts need to radically rethink food culture and what we as governors and trustees can do to make it happen.

Nicole, firstly can you tell us a bit more about Chefs In Schools and what you’re trying to achieve?

We’re a small charity of just 10 people and we’ve just celebrated our fourth anniversary. Our aim is to change the food culture in schools plate-by-plate, classroom-by-classroom and school-by-school. As a charity, we believe food education is of equal importance to food provision - you can’t have one without the other. The amount of times we’ve seen schools try to change a menu without educating pupils and the kids will push back, whereas if there’s an education which goes hand-in-hand with a new menu then it’s accepted and the journey is easier.

We start off by asking schools to tell us about their ‘food vision’ and then set about to deliver it. We believe in food that’s cooked by people who care and I guess that’s one of the key principles for us - that anyone who cares about what they’re doing can be trained.

During lockdown, we wrote a School Chef Qualification, 80% of which can be completed online. We wanted to reach anybody, anywhere in the country so they too can be trained on the programme. Chefs learn about the school food standards, portion control and using the dining hall as a learning environment. The training goes as far as how to have a happy team in the kitchen and how to use garnishes on the plate because children eat with their eyes as much as we do and if something looks appetising and adventurous, most of the time they’ll give it a go.

Currently we have employed 70 chefs and they’re part of what we call a ‘Chef's Alliance’ so they get together to share experiences, recipes and knowledge.

When a school contacts you for help, what’s the process and how does it work?

Usually someone in the senior leadership team or a school business manager gets in touch. We meet them to explain a bit more about who we are and go through the school food standards. The next step is to go into the school and do a ‘check-in’ which means looking at the food provision as it stands - the kitchen structure, the menu provision, the team and then we look at compliance. From this ‘check-in', we develop a proposal for the school based on their whole-school vision and produce a timeline and training programme to make it happen.

From that agreement, we’ll spend about 2-3 weeks on site helping staff to set the kitchens up. Then, according to how well it’s going, we provide 3 months of support, sometimes on-site but not always. All our contracts are for a year and the job description for the Head Chef is a really critical aspect of the programme. The role is ‘Head Chef and Food Educator’. That additional educational responsibility means that salaries can be more competitive with the restaurant industry which is where most of our chefs come from.

How competitive is it?

It’s quite competitive especially when you consider work-life balance as school chefs have the school holidays off and most of the time the hours are 7am to 4pm - so that’s why we’ve had a lot of chefs interested in the project. It’s also rewarding - that sense of giving back means a lot for the chefs working for us. It’s hugely satisfying when you feel that you’re making a difference in any child’s life.

I imagine some of these school projects have been really big. Schools that weren’t even meeting the food standards to something really quite different?

A lot of schools who work with us do extremely well. We have a primary school where the children are always coming to ask for halloumi skewers. It just shows the amazing transformation the school has gone through as it’s something that wouldn’t have been on the menu beforehand.

With the curriculum in secondary schools it’s a merging of the food tech departments and the food menu, so what children are taught in cooking lessons is mirrored in the canteen. We had a school where the children came up with their own snack menu - they made it and delivered it and it was really successful. For us, the successful model comes from bringing the children on board and making sure they’re part of the journey.

Sometimes we simply share our resources with schools and we have a great example of a school in Bournemouth where we did this and they just ran with it and created one of the best food provisions we’ve come across. Originally they didn’t even have a proper cooking space but six months later they’re making fresh pasta daily and they have a fire pit outside with a grill to make food. When you have senior leaders who get on board and are fully engaged in the project - a miracle is going to happen. 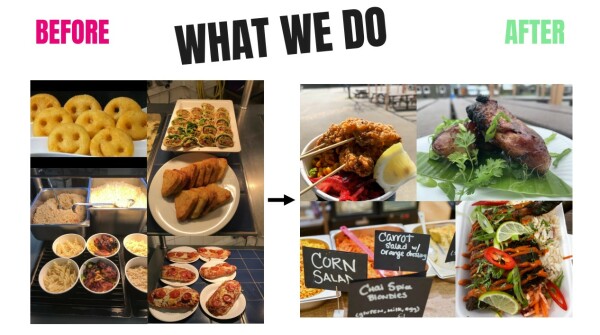 Should all schools have a food vision?

We believe so - it should be used throughout the school and also be in line with the school’s mission statement or values. Whatever it is, we suggest dividing it into 4 pillars: food provision, service, food education and the growing of food onsite. We encourage schools to focus on those key areas when producing their vision.

Sample food vision for a federation

Our Food Vision - what we want to achieve through the change...

We want food at both schools to be a central and important part of our whole school educational offer. We would like food linked to the curriculum, and topics we are learning, where possible. We want food staff to be part of the school, and part of the ethos of giving our children the best. As with educational staff, we will expect food-based school staff to perform in line with the school values and ethos.

We want children, staff and parents to have a say in the menu offer, and for children to learn about food and nutrition through a healthy school food offer. We want pupils to know about where food comes from , food names and try new foods in a nurturing environment. We want food to be cooked from scratch, locally sourced, seasonal and as ethical as possible."

How can governors or trustees begin to move food up the agenda if it’s not currently being given much thought?

As a governing board, you're ultimately responsible for making sure the food standards are met, and that your school is creating a culture of healthy eating and supporting pupils to make healthy eating choices.

But this can be fairly low on the board priority list. I was shocked that none of the induction training I undertook when I became a governor gave any insight into the power the governing body has in making decisions on food provision in maintained schools and yet it’s really important to make sure schools are providing a substantial meal to young people. Food education needs to be part of the conversation too, rather than just the need to serve as many kids as possible at lunchtime. It comes back to a food vision which we will all need in light of climate change and a growing need to for sustainability.

I’d encourage governors and trustees to look at the resources on our website and really begin to engage with what children and young people are eating and drinking at school if they haven’t already. Ask leaders to develop a whole-school food policy which is shared with stakeholders, monitor take up of school meals and ultimately, create a food vision which is fit for the future and monitor the delivery of it.

How are you finding the governor role yourself - focusing on so many different priorities rather than just the one?

I’m a governor at a high school in Streatham called Woodmansterne where we’ve worked with Chefs in Schools for the last three years.I joked in the beginning that I’d be the person bringing healthy snacks to the meetings but the reality is I’m running from one school to another before the meeting so it hasn’t happened yet.

I’ve always worked with schools from the food provision point of view. It’s interesting to see how school operates at the board level and where food provision is at this level. Schools are often working with really tight budgets and managing competing priorities. At the charity, food is fundamentally one of the most important things in school and can make a difference to a child’s day, helping attainment and behaviour. But from a board point of view it’s very different, it’s about the future of the school itself, not just the kitchen. It’s certainly useful to understand those different priorities.

Lots has changed in school food over the last few years since the turkey twizzler expose and following the publication of the School Food Plan (summer 2013), including:

The DfE’s strategy to improve sustainability and its response to climate change by 2030 includes this on food waste:

Get to grips with what the school food standards are and how you can monitor compliance, including what questions to ask with this free resource from The Key for School Governors.

"Why the school kitchen must be at the heart of a school’s vision " was published on 21 June 2022 by Jo Phillips - GovernorHub.